We’ve set up a mechanical workshop that provides training and jobs. We put renewable electricity into schools and build, maintain or repair equipment for the health teams. We’ve provided clean water for 8,000 people.

Poverty in Uganda impacts people’s health, livelihoods and education. It takes away opportunities we would take for granted in Wales.

Early PONT visitors to Mbale who had engineering backgrounds spotted the potential to use their skills to do something about this. We work with people in Mbale to help give back opportunities, so they have tools to improve their own lives.

Engineers have continued to make visits each year. Volunteers pass on their expertise, troubleshoot problems and oversee projects. Importantly we also raise funds in the UK so that local Ugandan people can be employed, benefiting them as they help their communities.

Engineers have contributed to many projects but perhaps the biggest impacts have been: 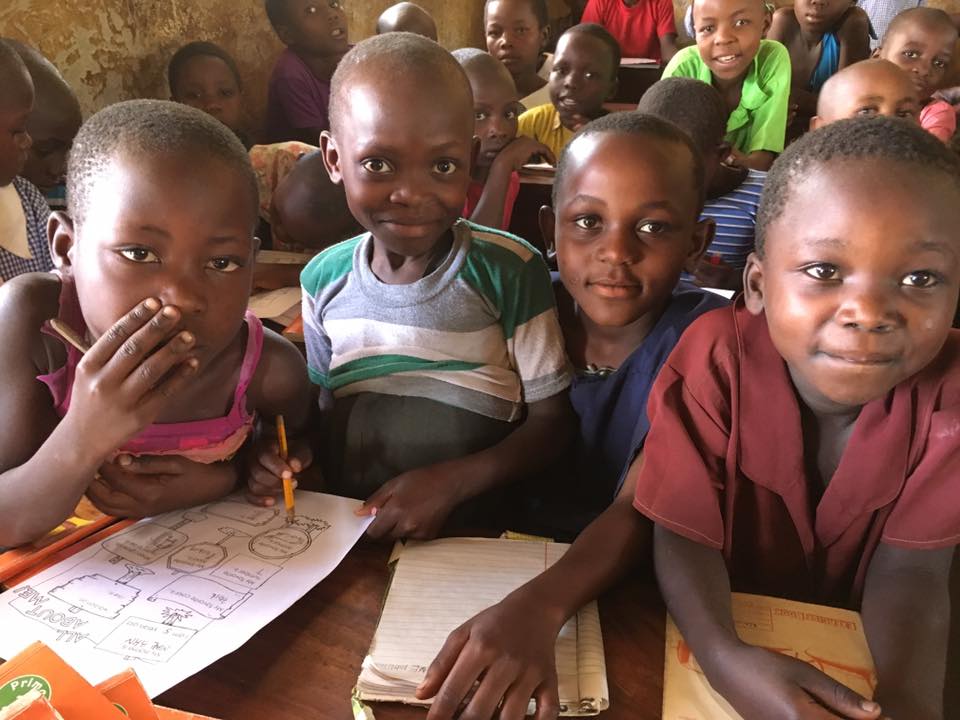 Heavy rain used to stop classes at Lwandubi Primary school. Classrooms in the school now have lights, and there is power to operate laptop computers. Read more 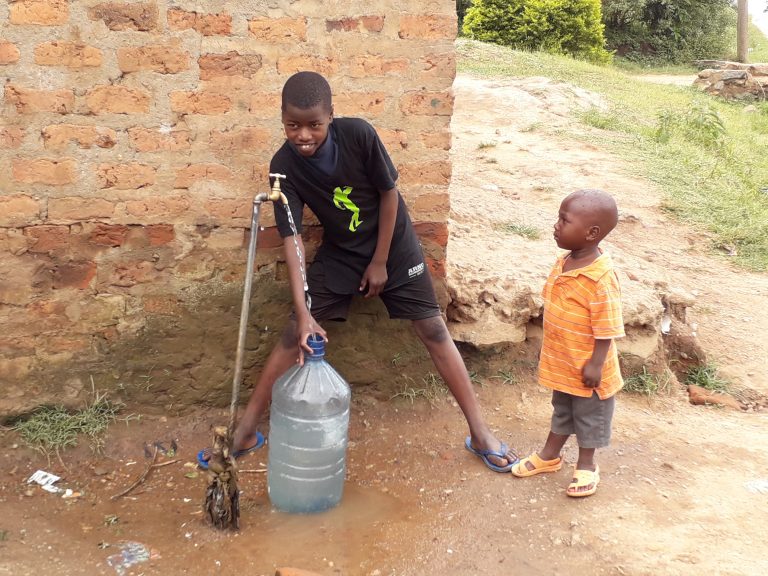 Mbale has a lush, green climate and water is not scarce – but it is often a long way from where people live, or it is contaminated.

In rural villages most people have to walk miles to collect water. The work falls mainly to women and children.  Schools often have no water so children either have to bring water with them, or the school day is broken up by having to take significant time out to walk to the nearest supply of water.

Contaminated water can kill, or at the very least make people too ill to work and provide for their families, to go to school or to their field.

PONT is working with one of our Ugandan partner organisations, JENGA, to change this for people in three villages around Mbale. We share our engineering expertise and fundraising efforts, and they bring local knowledge and on-the-ground management.

If a building has a tin roof, all that is needed for a basic rainwater harvesting system is some guttering and something to catch the water in. PONT funding allowed JENGA to access a mould and training to build suitable concrete water tanks in Mooni parish.

Another option in the right landscape is a Gravity Flow System, where a stream is dammed and fills tanks on a hill supplying taps via a network of pipes lower down.

In the foothills of Wanale mountain, PONT worked with JENGA to refurbish a system that brings water to 6000 people.

They live in and around the village of Mooni – a village that had been hit by a cholera epidemic. Locals attributed half the deaths in the area to the water – even bugs that weren’t deadly on their own could be fatal to people weakened by malaria or malnutrition.

PONT volunteers brought water testing expertise which proved that the stream feeding the dam was contaminated (and University of South Wales) students had the chance to join them). They tested other sources to find an alternative. They’ve since trained a team of local volunteers to do testing, so the expertise has been shared.

An engineer surveyed the route from the new source to the tank and a volunteer designed a new pipeline and in two stages the system was brought back into safe working order. 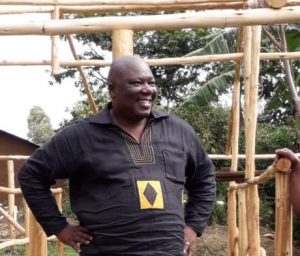 Vincent is from Mooni. After the water project he expressed surprise that he wasn’t getting regular stomach upsets any more – it had become as normal to him as getting a cold is to us in Wales. Every day that he can go to work because he’s not ill makes a big difference!

We believe everyone should have safe water and we’d love to do more – we’re currently fundraising for an extension to the gravity flow system. By working with local partners, we focus our resources where we can be sustainable and have the greatest impact. 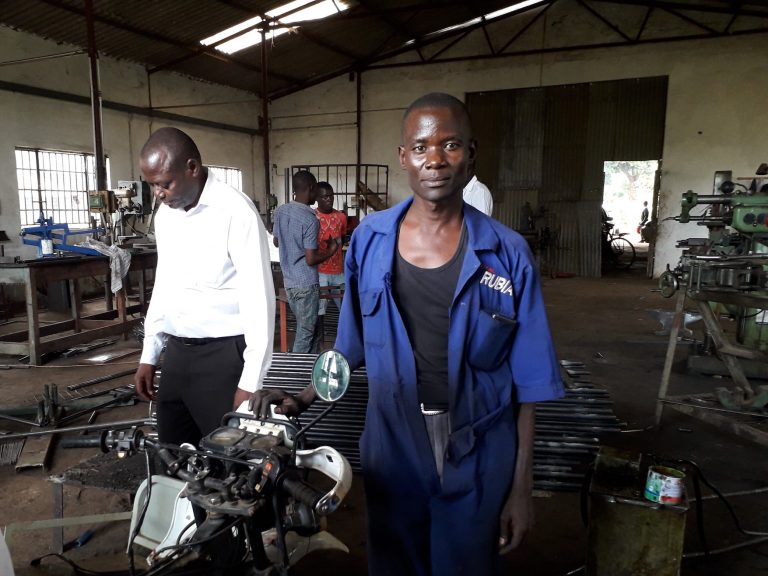 The story of the workshop shows the power of PONT’s community links.

It began when one of our Engineering volunteers found out his employer Orb Electrical Steels/TATA Steel  was getting rid of several machines. He spotted the potential for a small machine shop business in Mbale.

The links PONT had helped build between charities and local government in Mbale kicked into action and the local sub-county council provided an old workshop building initially free of charge. Orb agreed not only to donate the equipment, but also to cover the cost of shipping it to Mbale. The University of South Wales and members of the public donated some extra tools and accessories and a container was on its way.

The PONT workshop provides excellent training facilities for students from across Mbale region. Since 2017, it has offered apprenticeships in Mechanical Workshop Practice and Vehicle Mechanics. Courses last for one year before students take national exams at a local centre. Workshop staff also regularly supervise placement students from more advanced vocational courses across Uganda.

We want to give opportunities for local people to earn an income and be fulfilled in their work.

We want to encourage business ventures and economic development in the area.

The workshop draws orders from across Uganda and has produced high quality products such as chairs for a medical school, playground equipment for a charity, beds, gates and doors.

Using the machines they repair and refurbish shafts and couplings that have failed, enabling factories to get their machinery working again and their businesses back up and running.

Holistic links are one of PONT’s key strengths, and the workshop has been key in making some of our health projects happen. It assembled our motorbike ambulances and bicycle stretchers and still does major repairs on the bikes. Workshop engineers joined university student Alma to develop a stretcher that has a single central wheel. This is based on mountain rescue stretchers used in the developed world; in this case they enable patients to be transported from remote villages using the narrow footpaths. Another partnership with the hospital team led to the patient transfer trolley and tilting bed.

In a hospital that lacks many basic facilities and remote villages inaccessible to most motor vehicles, these machines save lives.

We support a mechanical engineering workshop which trains apprentices and provides employment opportunities, taking orders from across Uganda for repairs and providing new equipment. 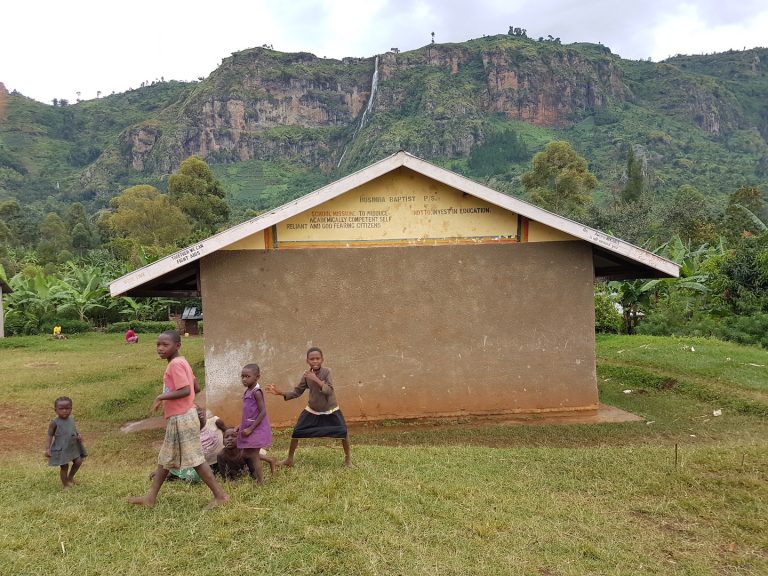 Most schools in Mbale region are very basic buildings that are not connected to mains electricity. During the rainy season classrooms can become very dark – and there is no chance for pupils to learn computer skills that would help them when they leave school.

Thanks to PONT engineers, four PONT schools in Mbale now have lights, and enough power to operate a few laptops in classrooms and offices.

Lights enable the school to be used for community meetings in the evenings, and allow classes to continue during heavy rain, when it can become very dark.

The laptop power means teachers have now access to a range of DVD and internet based educational resources and administration is more efficient for the Head Teacher. The children are able to gain basic computer skills, which will be a big help when they move on to secondary school.

Engineers visit from the UK and work alongside local labourers, passing on skills.

In Lwandubi, Busimba and Bulatse Primary Schools we have installed solar panels. The PONT workshop manufactured frames to mount the solar panels to the roof. At Bumayoka Primary School we worked with the University group to put in a micro-hydro system that turns a turbine with water from a local stream. PONT’s Education committee propose the schools for the electricity projects.

Local people are able to charge their mobile phones by paying a small fee, which brings valuable funds into the school for use in maintaining the system. It is also a valuable service for the locals who otherwise have to travel a distance to charge their phones. Phones are invaluable in Uganda, not only for communication, but as a ‘bank’ using ‘mobile money’ to execute transactions.

In November 2017 PONT engineers visited Bulatse Primary School with Education Programme Co-ordinator Eleanor and met with the headteacher and governing committee, and surveyed the buildings and planned the system. Stage One of the installation was completed in 2018, providing a laptop, and lights and sockets in one block of classrooms and the head teacher’s office. We hope to extend the system to provide lights and sockets in the other block of classrooms in late 2019.

We also hope to visit and survey the next school ready to start installation there in 2020.

Thanks to PONT engineers, three PONT schools now have solar panels and one has a micro-hydro system. They can now have lights and use laptops in classrooms and offices.

Engineers have also supported the hospital link. We’ve helped with installing the Endoscopy Suite, internet access and a washing machine (the hospital’s first) and we’ve carried out repairs to equipment and facilities.

Along with the university we have investigated what local materials in Mbale might be used to build better roads and make compressed bricks that require less energy than conventional bricks.

Want to help bring water, power and skills to Mbale?